Back in early June 2013 I installed pair of Öhlins Mechatronics shocks into my BMW R1200GSA and was very impressed by the way my bike handled after getting those in. 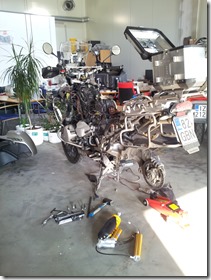 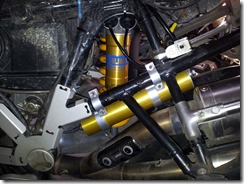 Now after driving two summers and a bit less than 40 000 km with them it was time to get them serviced for the first time. Manual says that on normal street use the service interval is after 30 000 km so I was a bit over that.

During the last summer I already had felt that everything was not the way they were originally and my plan was to take them out during this winter and now during Epiphany had nothing else to do than tearing my GSA down and getting shocks out. 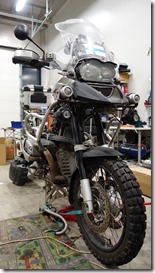 Had a friend there also working on his GSA, he was putting new set of Wilbers WESA shocks into his bike while I was taking my Öhlins out.

After getting fuel tank out I noticed that there was a oil leak in front shock, first thought that it was coming from someplace else, but as I got the shock into my hand I saw that this shock had just done its job and was in a need of service: Oil was indeed coming out from it.

It must have started to leak during the last few hundred kilometers as I had not noticed it before and there was not that much oil out.

Washed shocks and now they are waiting for delivery into service on tomorrow. Not really in a hurry to get them back, but better to be early as spring might be just around the corner. 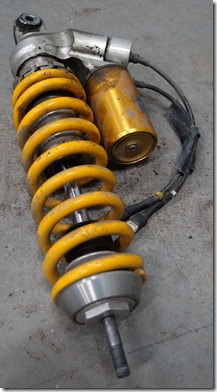 Rear shock was dirty as well, but no other issues visible: 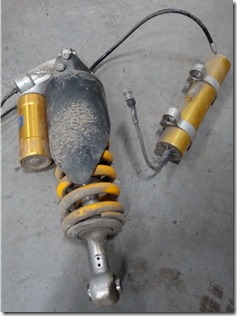 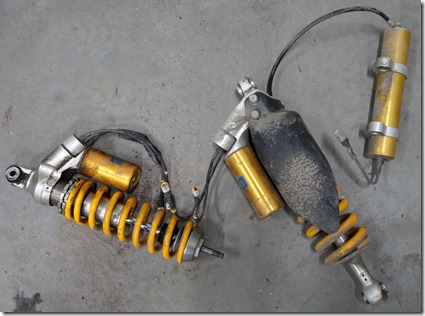 Good thing with Öhlins compared to Original BMW shocks is that these are fully serviceable and thus come back after few days good as new!

Helmet lock for my BMW R1200GSA