Just to do a bit of a riding exercise I decided to do a quick SS1000 Iron Butt ride before our trip to Spain in July.

Together with me was Juha S. with his new Triumph Rocket III Classic.

We started from Mikkelä Esso at 18:25 on 27th of July 2008 which was first evening start for me. Always before this we have started either early morning or morning, so this was also an interesting exercise how it would go.

I had planned an quick route from Espoo through Kuusamo and Oulu back to Espoo and we started riding accordingly.

Here’s our stops and kilometers driven according to my bike:

When putting these exact places into Microsoft AutoRoute, it gives following map with total length of 1697.6 kilometers which should easily qualify to SS1000 ride. 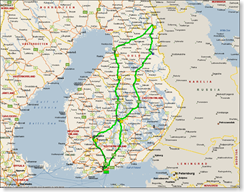 No big surprises on the way, route was really clear and with very little mandatory stops. Basically only Kuusamo, Oulu and Tampere were the ones we had to stop, other stops were just to get bike and our selves filled.

We did not get much rain on the way, just few drops. Temperature was at lowest 3 degrees Celsius (in Kuusamo) and at best 21 degrees when we got back to Espoo.

We also ride almost top distances when possible, only at Kärsämäki we took an stop to feed Triumph since it would not have made it to the next stop into Jyväskylä anyway.

When looking at my bikes fuel consumption, it goes pretty stable according to the road driven: on roads with speed limit 100 km/hour it takes a bit less than 5 L/100 km and on motorways it will go almost to 6 L/100 km. Another place where it started to take more was on road from Sukeva to Kuusamo and only thing which I can think of is because at Sukeva I put on my Gerbing heating jacket to keep me warm and put that to maximum heating! What a nice feeling when cold is not getting to me!

All in all, good trip with a good company.

After getting back I rested a bit and started preparing my bike (BMW K1200LT) for trip to Spain and back. I changed gearbox, rear wheel drive and motor oils and replaced oil filter. Now all I have to do is just general check, wash the bike and that’s it!