Day started at 07:00 with small breakfast, some bread, cheese and Fanta from hotel. I was probably the only guest in here…

At 08:00 I was already at the border when it opened, got first ticket on the gate and then headed towards next control point. Iran side was pretty much hassle free, after waiting a while until some local had their passports sorted out I got it stamped as well. Then it went to some customs control, they did not check any of my luggage, just papers. After this was the stamp to carnet and I was ready to go.

At some writings this Bajigiran border crossing was mentioned so that after Iran control Turkmenistan crossing was closer to Askhabad, but at least what I now saw was that it was right after Iran buildings.

Again, once I entered Turkmenistan border, I was assigned one officer to walk all the doors with me. I counted 12 doors where they all wrote down same information and gave me receipts like this: 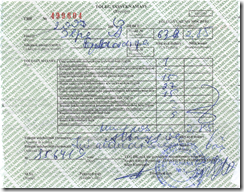 I needed to pay for

Not very cheap to get into the country… but on this it was a bit cheaper with transit visa than on normal tourist visa where I should have a guide as well.

I also got a paper with a map in which they draw my route and I was told not to go anywhere else but on this route from this border crossing to the destination.

All in all, Iran + Turkmenistan border took 2 hours and I was in the country. This is pretty much average time, not bad.

Started driving towards Ashgabat and once I got almost to the city there was still one more control point where they looked at my passport, nothing else. This was probably the original old border crossing point which was now moved up to the mountain by the Iran border crossing.

I was also running low on fuel so headed to the first petrol station to get fuel and as I had no local money asked if I could pay with dollars which was fine. Some 30 litres was 10$.

Ashgabat was really nice looking city with all new buildings, roads were excellent and everything was clean. Once I got out from the city the reality hit again. Bad roads, desert looking surroundings. There was new road coming, but it looked like it was going to take good few years before it was going to be ready…

Had some lemonade from the roadside local sellers where they made it on their machines, cold sparkling water mixed with some lemonade. Everybody was getting their drinks on these.

On Tejen I made a wrong turn, as I was following signs towards Mary so I was not that worried about on this. Road was just turning into really bad one and I had to slow down quite a bit.

Police stopped me once on the way, they were not interested on any papers, just asking who I was, what was the bike and how much did it cost.

Finally made it to Mary where I started asking after directions from local mini market where I also got some water to drink. Temperature was now some 43 degrees and only way to cool down was to drink more and sweat the heat out.

From Mary road was getting better so I could get the speed up again, still had many kilometres before Uzbekistan border.

Drove through sand desert, there was also quite a heavy wind blowing sand everywhere, road was also partly covered on sand. Not much traffic on the way.

At Turkmenistan I had no working GSM phone, there was network, but my operator had no roaming agreement with any of these. This I knew already in advance and this was only country with no roaming. This made life a bit difficult as well as I should have got information on where Team 2 was driving and where we should be meeting, but as least they got my location from Finland by SPOT which was all the time tracking my location.

Just before Turkmenabat I stopped for a fuel, again 10$ for a full tank. I was trying to find the hotel in the center of the city that was mentioned in the Lonely Planet book, but instead found almost new hotel with air-conditioning and all, even got to the internet for a short period to check my mail. 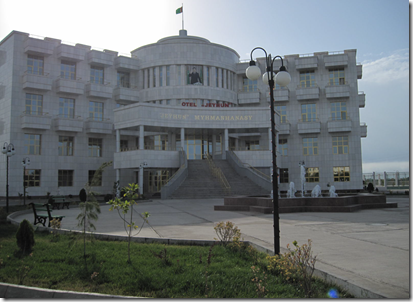 Got my bike behind the hotel to an safe place. Had some 12 hours ride from Iran border crossing to Turkmenabat. 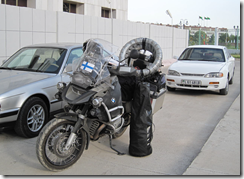 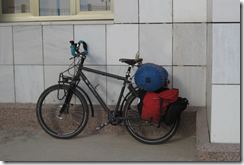 There was also one Swiss man with an bicycle, we had an dinner together in the hotel. He had been on the road since March, heading also towards Pamir but a bit slower pace as I was…

As you can see on above, I should have followed the M37, but made one wrong turn… but anyway I was on time at the hotel so this was all fine. 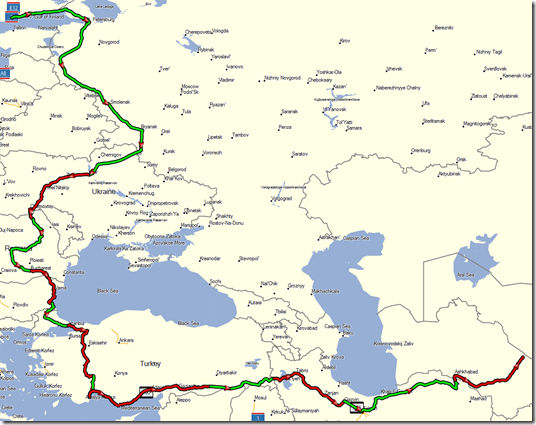