As the July gets closer making decisions on which route should we take gets more
attention.

So far it looks that we are driving from
Espoo to
Warsaw and stay the first night somewhere in there. This would mean
driving ~1050 kilometers on the first day!

Next day as we continue from Warsaw, drive through Czech Republic and end up somewhere
in
Zwett, Austria. We are ~1800 kilometers from Helsinki.

Then we enter shortly into Germany and drive through Austria into
Milan, Italy and continue all the way almost to the
border of France close to Eclause for third night.

From here we drive pretty close to coast until we get to Spain for the night somewhere
close to
Balaguer, ~3650 kilometers from Helsinki.

And on the last full driving day close to
Atequera, Spain for the night and during the next half a day we drive the
last few hundred kilometers and end up in city called
Rota, at this point we have driven ~4800 kilometers from Helsinki!

Current plan includes zero kilometers toll roads, which actually means that we are
going to drive long days and see a lot of places during our drive. But that’s what
the motorcycling is all about!

Below is a map of the route that we will be taking. 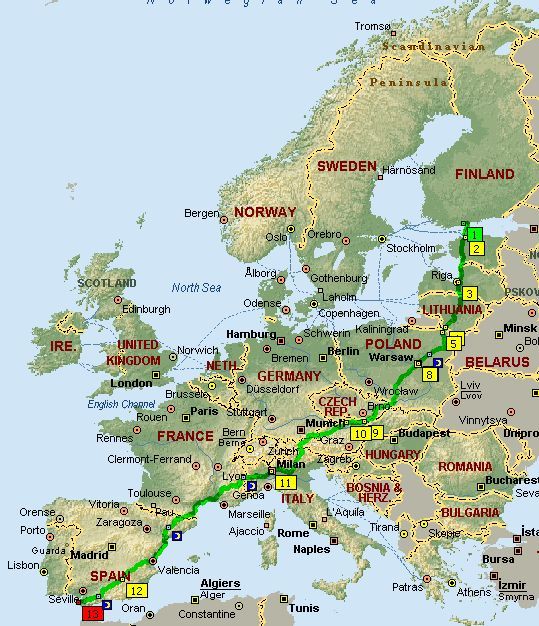