Day started with an breakfast at the hotel 07:00 and followed by normal packing routines. At 08:00 engine was running again and I was on my way towards Turkmenistan – Uzbekistan border.

While driving through the city I noticed that on every street corner there was policeman standing. Direct route to the border crossing was closed due to this, I needed to drive through some unpaved road to get to the border.

On the way there was also one river crossing, on this point there was also police checkpoint and I needed to pay 7$ or 20 local currency to get forward.

It was almost 50 kilometres from the hotel to the border so that took a bit longer than expected.

At the border there was no issues nor any payments. From Turkmenistan side everything went smoothly, just a stamp on the passport, checking of transit visa document where they had pointed my route and exit border crossing and off I was towards Uzbekistan border.

On Uzbekistan border there was three doors, two of them just took my passport and filled in some paper from it, third one was customs and there they gave me those familiar looking papers which were also on Russian border. This time they were only in Uzbekistan language, no English version available! After looking at them for a minute I started hearing some Finnish words behind me and I was a bit surprised, behind me was one Estonian truck driver who then helped me with the paperwork! Excellent luck!

So I got all the papers done, exited border and started driving towards Tajikistan. I had cleared both borders in less than an hour!

Uzbekistan was pure transit for me, plan was to get to the border crossing near Samarkand.

On the way I ran into Italian biker who was on his way to Samarkand as well and then to Tashkent to meet his friends. We drove good while together until I finally got hold of Team2. They had finally agreed an meeting place after seeing how I was making progress and now that my phone also started working I could send them confirmation message.

Meeting point was going to be on Ayni in Tajikistan. I still had lots of kilometres to drive, but nothing that I could not handle.

When driving through Uzbekistan I started noticing that all gas stations were either closed or there was a long queue, but even on these nobody was getting any fuel! Lucky for me I had all tanks full so I could get through Uzbekistan without refuelling!

Driving through Samarkand was quite easy, but after that I got into bit of trouble again. I lost the main road somehow, no idea how that happened… I did first detour, but managed to find my way back to the correct road again, lost ½ hour on that…

Managed to get to the border, both Uzbekistan and Tajikistan border controls were really fast, 40 minutes and I was on Tajikistan!

Here I managed to get lost again, road that I took looked like the main road, other road was just really small unpaved road, but that was the one I should have taken! Both of these detours are seen on the map below…

After the second detour road turned into really bad one, muddy and slippery. From the border it was some 120 kilometres and it took almost 4 hours to drive this!

But eventually I made it to Ayni, stopped on one store to get some water and called Team2 to get confirmation on where they were. It turned out that I stopped just one kilometre from the point where they were waiting for me.

They had already looked into one potential sleeping place, but we agreed to first get some fuel for my bike and then see how the hotel or hostel was looking at the city.

After quick refuel we started looking into the hotel and finally found it. No signs outside nothing that could indicate that it was a place for us to sleep, only by the help of local people we found it. 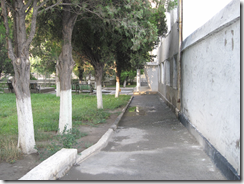 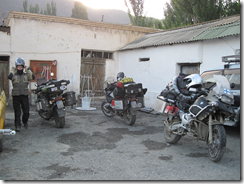 Place was quite crappy, no shower, some running water to the room, toilet was absolutely something that I did not want to go, but at least we got roof on top of us and an bed, bikes to an safe place so this was it. It was already getting dark so quickly just gears of and to the room where we cooked some camp food and then to the sleep.

This days driving was 608 kilometres and it took 13 hours before we entered into the hotel.