Morning came again and it was time to leave from Sary-Tash. From the bicyclist we had already learned that we would go into some high mountain passes again, road would be under construction for the first 70 kilometres or so. There were Chinese road workers everywhere building new road over the mountains.

This was now the day that we would pass the restless area of Osh located in Fergana Valley  that we had heard so much about. 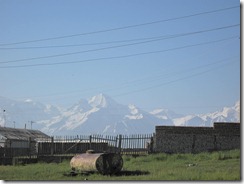 Very soon after leaving Sary-Tash we started climbing up, passed these two mountains and after the second one road was also turned into older one without any road work. 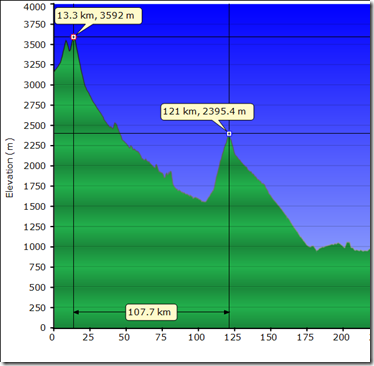 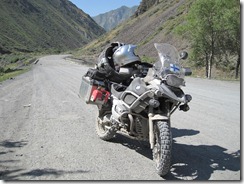 I was riding a bit faster on these roads and sometimes had to wait for others. This was then the photo shooting opportunity! 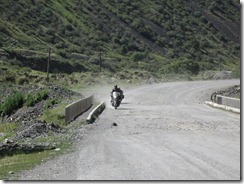 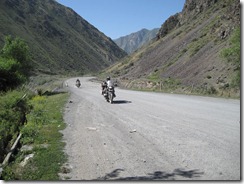 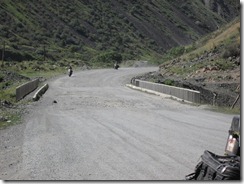 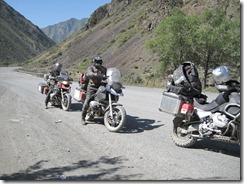 Once we got down from the mountains, we started approaching Osh. We were not to enter the city as there were lots of road blocks where they were searching all your luggage, instead we turned into road which was taking us through Uzgen towards northern part of Kyrgyzstan.

In Uzgen we did some money exchange to local currency, Kari and Anders went to this  exchange office, I was watching after the bikes. 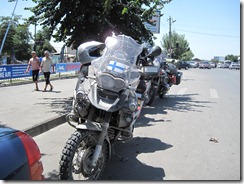 And as usual, it did not take that long before there was big crowd around the bikes, people taking photographs and asking questions.

In Jalal-Abad we had some issues finding correct route towards Bishkek, we asked from lots of people and probably due to our weird way of pronouncing it there was couple of different directions that they were trying to send us… at the end I was then starting to trust Zumo and planned route and just went back to the road we came. It turned out to be the correct decision and this lead us back to main road.

Anyway, not totally worthless detour, we saw quite a many burn down houses in Jalal-Abad, some we already saw when approaching Osh, but in here there was a lot of these. They were just rebuilding all of these so lots of building materials were just lying on the city roads. 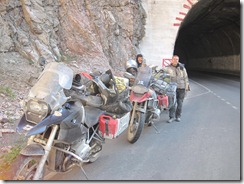 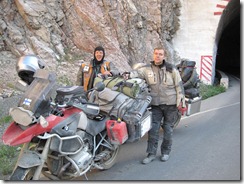 Route that we had taken was excellent, in very good condition and we got the speed up again. Road was following some river and Toktogul Reservoir. At some point we also came across checkpoint where we needed to pay some 5$ for using the road. 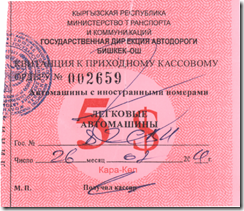 BTW This was something that needed to be saved, it was asked later on.

Did quite a long detour around the lake and once we were approaching Toktogul city, police stopped us. I was on the lead and this police guy came and started saying something about speeding. Sure, I had some speed over the limit, but not as much as he said. Anyway, Kari had some issues with his stomach and was totally wasted, did not want to spend too much time on it. Fine was 1000 local which was ~20€ or so, so just paid and we were on our way to find hotel.

Managed to find hotel quite soon after this, not an fancy one, but it had a room for all three of us, shower and a toilet. We even had a living room in our usage. 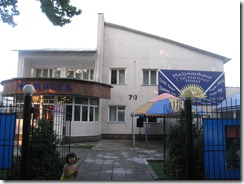 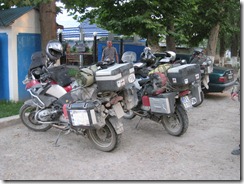 And we did get our bikes also on the back of the hotel, not very easily but got them behind closed gates. Somebody had left their old car blocking the route, there was just enough room for our big bikes to pass it… 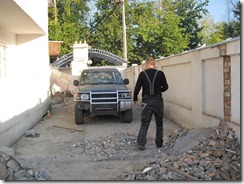 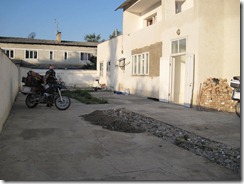 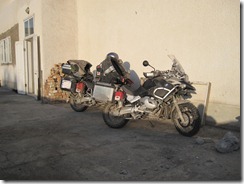 Me and Anders had some dinner, local cuisine of meat with some cheese salad. After that it was time to plan rest of the journey on how to proceed through Kazakhstan and then just sleep.

Downstairs there was some local people singing karaoke, but at the reception they asked from us if the music was too loud or not and once we said yes, they started slowly stopping it so we got good night sleep.

Issues that we had been hearing about situation on Kyrgyzstan were largely just rumours, people were living their normal lives, some police control points on the way but quite a many of those were already gone and those that were left were not really interested on us. We were stopped on one place on the way.

Scenery and people were very nice, might be that someday my bike is going again towards Kyrgyzstan!

This days driving was 581 kilometres in 12 hours. 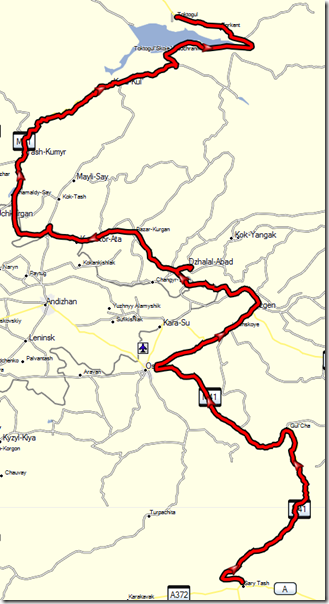 Total after this day is not 11332 kilometres. 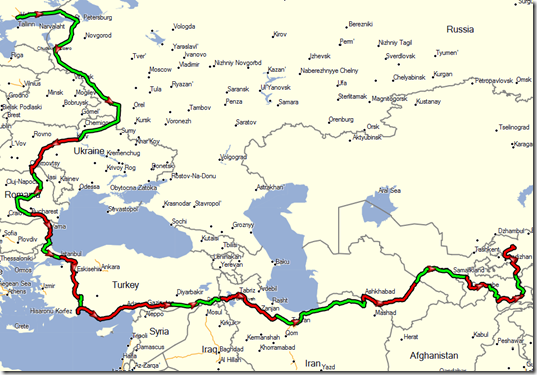