For many years my way of reading news has been RSS feeds. 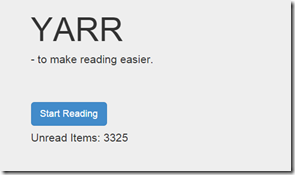 In the beginning I used features from Internet Explorer and at some point I moved over to Google Reader. That was pretty perfect tool for this purpose and it was too bad that it was shut down 2013.

At that point I did some trials to get my own RSS Reader developed, but time was not right for that and I adopted after weeks of wondering to use Feedly. Feedly has served me quite well for this time, have not understood all the features it is giving and neither used those but it had an client for Web, Android and IOS so I was all set to go. 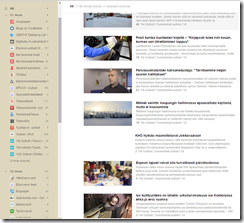 While reading feeds with my computer Feedly was most of the time quite fine, but required lots of computing power as it’s interface is quite fat. It is using lots of Java Scripts which in turn call Feedly servers a lot and these are causing delays when there are lots of feed items to read (I get on average some >1000 items per day).

I was not either that much enjoying the feature that by default when you click item title it opens it in Feedly and on most sites I follow this does not provide any additional info as they do not provide whole article through RSS feeds. This caused me to use heavily CTRL+click on the title to open item directly to source on another tab on my browser and then I had lots of them open at the same. Not good.

Feedly also seems to bring same content multiple times (mainly due to me as I have some feeds that are cross referencing each other) so I ended up reading multiple times same items.

On Android Feedly client was almost ok, except that by default it is using it’s own internal browser to read items and again after two clicks. Two more is required to open site directly with browser.

On IOS Feedly client was pretty much the same as on Android, but it’s internal browser was a lot worse. On some web sites I follow it totally freezes while reading content or then it does not open those at all forcing me to open browser anyway – again after couple of clicks and then I need to click some more to return to Feedly.

And on top of these, Feedly browser client does not really work at all on mobile devices like iPhone 6 Plus I use. It is just too fat client and is freezing the device.

So, from these standpoints I revised my original idea of creating my own RSS Reader solution which saw daylight with the name YARR and now I have lived with it for some time. Still some development work to be done, but it already works for me very well.

YARR is implemented as a Microsoft Azure Website with some Azure WebJobs to find the feed items and very very plain and simple user interface which works on browser: 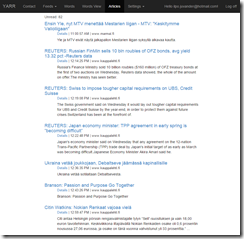 And on my iPhone Safari as well:

Same user interface on both worlds and I don’t have to jump between different applications, all works in browser and once I have read an item I just press back button to get back to the list and read forward.

While testing YARR I also discovered that I had some 20 feeds that were no longer working due to the fact that source feed had changed. In Feedly there is no way to see if feed is in error or active. This feature is now built into YARR as well so int he future this will not be an issue for me.

Creating YARR was also a learning project me, started creating this with new tools for me like Microsoft MVC.

Some challenges still that I need monitor: Not all of the sites provide character encoding information so once again have issues with special characters, but one by one I have managed to find solution for them. Also not all of the maintenance user preference features are implemented but now that I have main solution working I will bring those into the system as well.

Lots of ideas are also drafted where this will be developed in the future, will have to see how much and how fast of those I will introduce.

PS: YARR will be open for public in some form after a week or two once everything is stabilized.

YARR has now been made to public preview