On the morning I checked out from the hotel and dropped all the luggage into reception before leaving to work.

We had successful day and managed to get everything done by 14:00 so this meant early start for my planned SS2000 and final home coming trip.

Just quick walk to the hotel to get all my stuff, Gore-Tex on, luggage’s to the bike which was still waiting at the hotel garage and then towards first gas station which was only few hundred meters from the hotel.

At 14:31 I was all set to go, tank full of gas and TomTom had all directions loaded up.

Drive through Germany was really pleasant, no big traffic jams on the way, just some road works which did not really slow down at all. Just driving and filling up tank.

I started seeing that after driving ~1200 kilometers I started being in Copenhagen and was planning to catch a hotel in there. I had nothing reserved so I planned to get into Clarion Hotel Copenhagen which from previous trips to Copenhagen I knew to be on good spot and it also had working wired internet connection.

First driving route was this:

Just before 01:00 I arrived there, got the room, quick shower, checking for e-mails and time to sleep. Did not had to wait long before this happened…

At 06:45 I had wakeup and 07:00 I was downstairs having breakfast which was excellent. After that I did some calculations on how much time I would have before leaving towards Stockholm and noticed that I was not in a hurry at all so just before 08:00 I was on the road again.

First 24h driving was to be ended near Stockholm before 14:31. I had marked in TomTom the first possible place to end this day and once passed this way before end time I just drove further since anyway I needed to drive these kilometers to get home.

In Järna Södertälje Municipality I finally then took the end for the first 24h after driving ~1800 km and this was also some 45 minutes before the actual end time, but I thought that good break at this point was wise thing to do.

I found one Finnish family from Turku to sign my papers for the ride, waiting few more minutes and second 24h was about to start.

At this point I still had the option of taking the ferry, but as the general feeling was excellent, bike was working well I just went for it and started driving towards home. TomTom was showing that I had 1815 km driving ahead.

Driving through Sweden from Stockholm via E4 was really not that nice. Road was horrible, nothing to see and I decided that this was my first and last drive on this road. It was switching from one lane to two lane road every 500 to 1000 meters, had these motorcyclist killer wires on both sides of the road. Cannot understand the thinking on why it was built like this. Local car drivers were not comfortable on driving this either, in general when the wires were there they were driving 10-20 km/h below the speed limit, once the wires were gone they were driving normal speed.

But, eventually I got to Haparanda and to the Finnish side ~2:30. That was a long night. 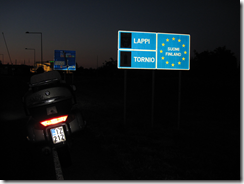 By the early morning I did not find my self sleepy at all, but after driving some 24 hours it really started to hit. I had to stop quit often for a cup of coffee, just to walk a bit and driving started to slow down. Since this was the way home and last driving day, I was not planning to keep any sleeping in hotel, but just driving through.

Originally I planned to be at home around 09:00, but because of these stops I eventually made it to the Mikkelä ST1 station at 12:20. Not too bad, I still had more than 2 hours driving time ahead.

This was the last 1½ days worth driving:

After getting back home, quickly just taking all the stuff out from it and it was time for after drive Lonkero and Sauna!

Some paper work to be done, but that can wait for few days as IBA Finland has now the busiest times so why to push everything in there.