First legs plan was to drive from Espoo through Russian to Kiev/Ukraine.

Harri came to escort me all the way to Vaalimaa border after which I continued it alone.

At Finnish side of the border everything went smoothly as before, on Russian side I had to write the forms twice before I got everything in order. Those typing mistakes are really hard when you don’t have a delete button in the paper to correct them…

Eventually I made through, didn’t take that long.

Next I continued toward Vyborg and then to St. Petersburg. In St. Petersburg it all started. I had done one stop before that to fix my gears since it looked like its going to be raining a bit. Well, it started 10pm and rain did not stop at all until 6am… this was going to be a wet one!

I found the ring road around St. Petersburg and followed it to my next one M20 to south.

Driving through Russian was not really a big issue for me, I had updated to my Zumo the Russian map and just followed the planned route. In the map there was also alerts for almost all of the village low speeds so radars were not an issue either. Not that I came across any of those on Russian side, it was too much water for them to sit outside…

After Nevel I found an road which said at the beginning that ‘You are now entering an paid road’, was a bit wondering what this is but decided to continue to that. After driving some 70km I came to some place which looked like a toll gate, but the guys were not coming out from their booth so I just followed one car through the gate and paid nothing. They were not coming after me either! Something good was coming out from the rain.

At Nevel it finally looked like its going to stop raining and it did – for an hour or two and then it began again even harder with thunder.

This time rain continued until 14pm so I had practically driving in rain 2/3 of the trip and I was really all wet, lucky for me only from outside…

In Smolenski was only occasion where Zumo got a bit lost, partly because of I did a mistake to tell it to drive through the city. City road at Smolenski were not really correct and had to guess two turns get it on the track again.

Russian border to Ukraine was interesting one, I just rushed to the head of the queue, got there and they took me immediately in. There was only the chief who knew some English words and guy was really interested on the bike so he just took me into his office and did all the paperwork very quickly. This all took something like ½ hour with all the talks and fixing my gears. No need to fill in any papers that were needed last time when entering into Finland at Vaalimaa border.

On Ukraine side I did again the same thing, just headed to the front of the queue. On the way there were some angry persons waiting in the queue who were waiving their fists to me, but I choose to ignore them… Got to the border gate were I got two papers, one was the immigration card and second one was something that I knew nothing about since there was no English written into it. Once I asked this, the guy at the gate filled it in. It was just supposed to tell the vehicle data.

After this to the customs and passport control where first guy was trying to get me to the end of the queue, but lucky for me there was again their manager only one speaking some English so he took my papers and started handling them.

Once he had given orders things started running smoothly again until the last guy. To what I understood from his Ukrainian language, he was trying to get some money out from me for some reason. I just went to the mode that I did not understand at all what he was trying to say (which was partly true since he did not know any English words…) and after we had continued this some 10 minutes he gave up and opened the gate!

Just quickly gears on and On The Road again!

Last leg was only ~300km and it went really with speed. At least those parts were there were no police with their radars. I have never seen that much police cars on the road watching traffic than on this leg. There must have been 1-2 police cars on every 25km! I had no issues with them, I just chose an local driver and followed from the distance. Once this started showing red lights behind to break, I did that as well.

One of these drivers was caught on the way, but I was not. Good tactics.

When coming into Kiev I realized that I had chosen hotel from a bit wrong place, it was on the opposite side of the city than I was coming and had to drive through it to get there.

But eventually I made it to the hotel and got a room as well.

One could argue something about Iron But here, but not going to do it right now.

This was the route I took (click image to view SPOT data in Google map): 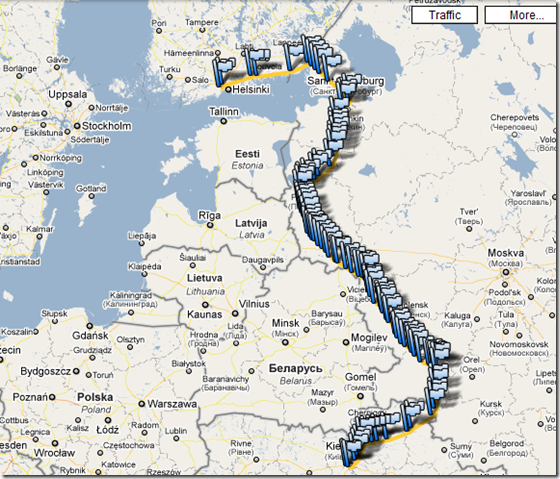 Had some issues on the SMS engine, sometimes SMS message did not left my phone and I just also noticed that it had not updated location using GPS. Need to put the GPS on and wait for it to get the fix.

Life is learning and hopefully I will learn from these as well for the coming days.