Had an *early* morning, started the bike before 9am and started driving towards Egirdir, which is a city by the lake, a bit more than 100km from Antalya.

On the way spotted one GS driving behind me and once I stopped to get some water, this bike followed me to get gas. It turned out to be an Canadian guy, living in Dubai who had just flied to Istanbul and rented a bike from there and is now driving around. We drove few kilometers like this until I turned south towards Antalya from Sakarya.

From Sakarya road was excellent, partly newly done, partly under work but in general in good condition.

On the way enjoyed according to my tradition (which is to have one Big Mac Meal On The Road in new country) some food. 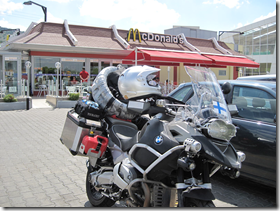 This was in Afyon.

During this stop I also emptied my gas canisters so that I would not have to make another stop. After that I just drove to the destination I had chosen.

After driving 634 km in 9 hours I finally arrived to my hotel. 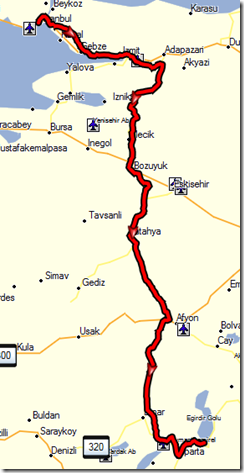 This brings me total driving of 4654km.

So tomorrow is just two hours drive or so to meet my family at Antalya airport!