Today was the starting of our Caucasus 2011 Tour.

We left from Helsinki to Tallinn with last ferry and plan was to start driving right after we get to Tallinn direct route to Budapest.

And that’s what we did!

Once we got to Tallinn, it was already raining. I had put my gore-tex liner under my jacket and trousers already on the ferry, but decided to put also rain suite on before we started fuelling our bikes for the planned SS1000 ride.

Once bikes were fuelled, paper work for the ride done (we got our witnesses from two Italian girls already on the ferry) we started the ride.

We were following exact route with same fuel stops as I had done on the way to Rota 2009, so no big surprises waiting.

Only thing that messed things was the weather. It rained all night, stopped once we got to Poland, but started again later on in the evening. So we were really wet!

Ride itself went just fine, we were two hours early in Budapest, which is not really ok for basic SS1000 ride… but when looking at our route through Poland, this is not big surprise…

Our route was this: 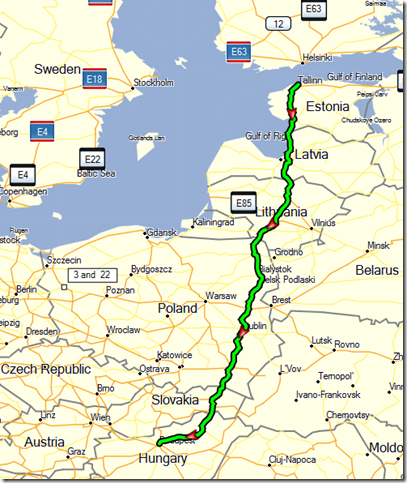 I had reserved a hotel in Budapest, same as we had before, but once we got there, it turned out that hotel was overbooked and they had transferred us to other hotel, some 10 km away… so to the bikes again…

At our new hotel we did get some pizza delivered from nearby pizzeria and three beers to go. After pizza and two beers Harri was totally gone and I was still writing this…

Ride was really hard compared to *normal* SS1000, weather was bad, route was really horrible etc. etc. Not really a route that first time IBA rider should take. But we managed to do everything by the book so all ok.

Tomorrow we start towards Serbia and Kosovo, have to see how far we get! This time not reserving hotel in advance, so we can change our plan if we feel like it.

Days in Rota are Getting Close to its End!