Took longer than usually to sort target for coming summer.

But as flights for my family have now been booked, I just have to sort out which route to take…

As I really hate flying and I try to void ferries as well, only real option is to take the eastern route option – again.

Currently thinking about driving through Russian to Ukraine, some 2000 km transit phase in two days or so.

Then explore some mountain area in the western part of Ukraine, then move quickly to Bosnia and Herzegovina and Sarajevo. From there explore again mountains and smaller roads in Montenegro, Albania and Macedonia before final transit towards Antalya to meet my family for two weeks. 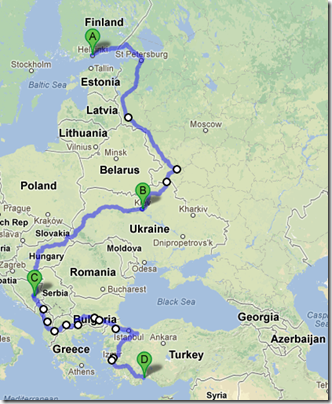 Getting back to Finland might take me via a bit longer eastern route:

But this is still a bit open and under planning, but idea is really to go east and to the north and drive really small roads in the areas where I have not been before. Getting back home is going to be ~7000 km…

Let the planning and preparations begin!