Today’s plan was to drive from Ioannina / Greece to Petrovac / Montenegro.

Day started ~09:00 and since it was only 21 degrees out, I decided to drive with all Gore-Tex clothes and take them out if it becomes too hot.

First trick on the day was to get TomTom to guide me to the border of Greece and Albania since they are on separate map, you cannot directly point it to the other country and I had to choose one village closest to the border and drive there and then switch the map and continue.

On the Greece Albanian border Greece side had no issues letting me go out of the country, but on Albanian side I had to present all the motorcycle papers along with passport and at the customs I even got an certificate that I had the bike with me when entering Albania!

Albanian side was excellent ride. Although the road that I choose was at first not at its best, the views were excellent and since I was riding only 50-60 km/h, this road condition did not really matter.

In Albania I did only two quick stops to drink, once in some far away country place and second time some 100 km before Montenegro in local gas station.

Traffic was not that bad, although some of the people were driving these local roads which were not in perfect condition like they would have been good highways, but still they passed by using a good distance and not disturbing my driving. But still, it is good to look all the time in the mirrors to see if there is somebody coming from behind of you.

Good think in Albania is that even though euro is not official currency, they all seem to accepts euro’s, which is good since credit cards are not that widely accepted.

Once I got the the Albania Montenegro border, on Albanian side I just had to show passport and leave the certificate from the bike that I got when entering the country and I got out. On Montenegro side procedure was again bit different: there I needed to show passport and also green card I got from insurance company for the bike. Good for me I had that with me. After that I was in Montenegro!

Now it was just time to find Petrovac, before that one quick stop for drink and filling the gas tank in Podgorica. TomTom had co-ordinates for Petrovac, but still there was one surprise on the way: there was a new tunnel road built which TomTom did not know and I decided to take that. That was a bit mistake, should have taken the mountain road… I ended up doing a bit side tour and the end of the tunnel before finding the correct road again, few kilometers and 15 minutes wasted on that…..

After I found village Petrovac, finding the Hotel WGrand was easy, all the area’s hotel were pointed out very well with signs. TomTom had no clue what so ever from this village, only the location of it.

Driving into this village from Ioannina was ~500 km and it took 9½ hours so I arrived here ~17:30 local time. Montenegro is in different time zone than Greece where I left.

Hotel is very nice, excellent wireless internet connection which cannot be said from all of these places where I have been!

Dinner was excellent in the restaurant near by, 300gr grilled stead with potatoes, rice, beans, small carrots, mixed salad and two big beers was only 18 euro’s.

After that I was ready for a good night sleep.

Waking up in the morning was quick, 06:00 local time and starting to plan for next day. This looks like it is going to end up in Split Croatia. There I have found a nice little hotel to stay for a night.

Below is the map of the route I took, recorded by TomTom (click for larger map): 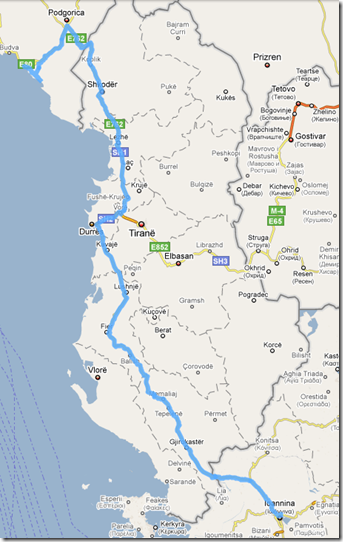