Morning started a bit later than usual as we had agreed to have some service for the bikes. Got some breakfast first with couple other tourists in Pamir Lodge. 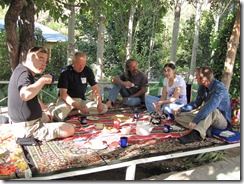 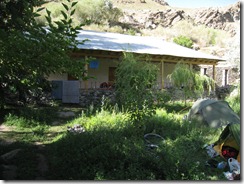 After this I headed to town to find a place where to get my tyres changed, plan was to switch from Anakee2 to TKC80 which I had been carrying all the way from Finland with me.

Found a place where they did exactly this and agreed price to be 30 somon which was ~6 euros.

I took wheels out an handed them over to guys through this small window: 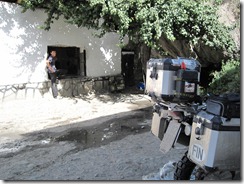 Then headed back to Pamir Lodge where Kari and Anders were also working on their bikes. 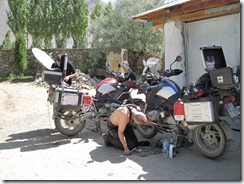 Kari was checking valves and air filter condition, Anders was just doing general check. On Kari’s bike we had small issue on checking valves as his engine guard bars needed to be removed before the valve cover could be taken off and it was quite a job. But after getting those out and measuring valve clearances, no need to adjust them.

I was just checking the air filter, my valves where just checked so no need to check them now.

We had pretty much all the tools with us to do this kind of maintenance, some tools Kari needed to loan from me since I was really prepared on this because my first 10 000 km alone.

So, time to change plans again and choose direct upper route to Murghab.

We got moving towards Murghab around 13:00. One detour on the way, we chose wrong way out from the city, but when hitting first control point guy was pointing us to the correct way.

Then when really getting out from the city, we hit also one control point where they charged some 40 somons to get passed by. This was probably just money into their own pockets, no real reason given why this money should have been paid… but we were friendly and just gave this to be able to continue. 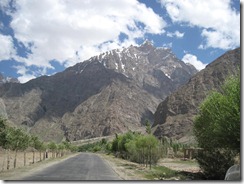 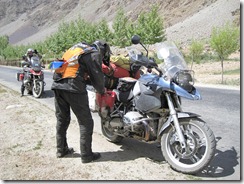 Very soon after this we came across Team 1 members, Sakke and Esa. 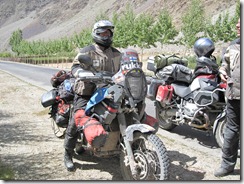 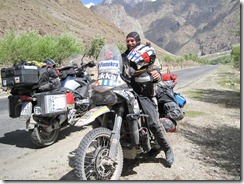 Had a chat for an ½ hour, we were a bit wondering where rest of the group was, Esa and Harri so we decided to continue and see when we ran into them.

It took an hour drive before they came: 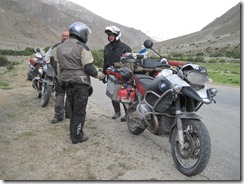 Harri had an accident with an dog, but was still driving after that. Bike had some injuries and so had Harri, an broken collarbone. Nothing too bad, but enough to start thinking on how to continue the trip. 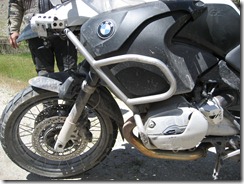 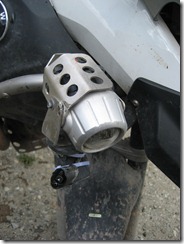 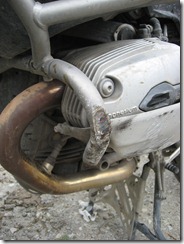 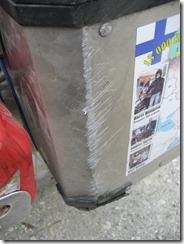 After a while we started to continue forward and Harri and Esa headed to Khorog to find doctor.

On the way we needed to put some extra clothes on since we were climbing higher and higher. 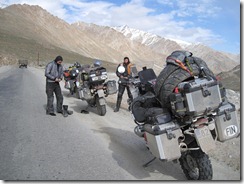 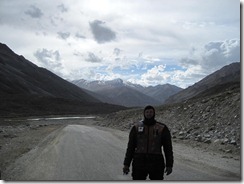 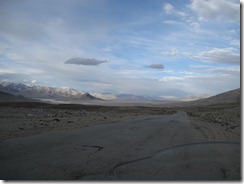 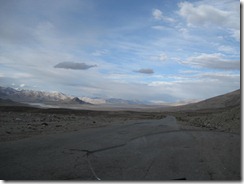 We drove over 150 kilometres on higher than 3800 metres, highest point was almost 4300 meter. On this height all of us started feeling this, I also fell here since I just did not have any power left on my feet to hold the bike on one stop…

Kari lost his rear fender here as well, it was stuck in rear wheel, but once we got the bike on centerstand it got loose and off it went. This was the same part I lost already while ago.

Pretty nice views all the way. 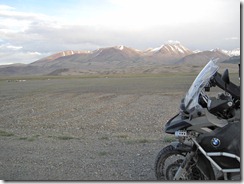 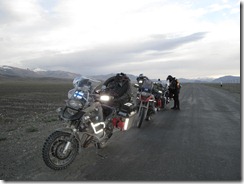 When approaching Murghab we saw one more control point. After standing few minutes by the gate, there was a very much drunken guy coming out from his box and telling us something about registration at Murghab OVIR station. But this was not something that we should have even be done since agreement between EU and Tajikistan. Got through the gate and started finding place to sleep. We managed to find a place called Ibrahim where we just slept on the floor. Price was some 10$ and included dinner and breakfast. Got also our bikes to safe place behind closed doors so everything was ready for us to sleep after dinner.

Today’s driving was 332 km and this took some 7 hours with the meetings with Team 1 and Team 2.

Total after this day is now 10515 kilometres.

After this day is now finally time to start turning towards Finland!

Day 6 Getting closer to Antalya