Day started early again, quick packing and as I was totally full from yesterdays
late dinner, no breakfast at the hotel.

When checking out there started this man at the reception mumbling something and
once I got paid, he started dragging me out to the bike and with the bike forward.

Then it hit me: They had been during the night watching the bike that it was so
dirty, that it needed a wash! There was other man outside washing cars so he took
me there with the bike and immediately he started getting the insects out (there
was plenty of those from last evenings ride!).

Bike did not come totally clean, but better as all the mud went pretty much away
so now it is better looking when coming back to Europe.

After wash, refuel and 1L of juice down the throat as breakfast. 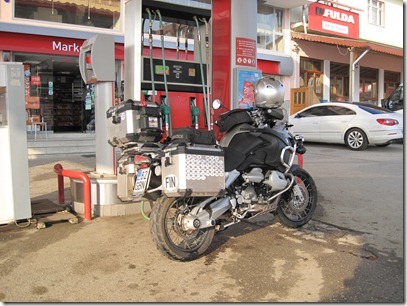 I had reserved a hotel from Bucharest, which was some 1150 km away from Tosya.

Driving felt good again, was a bit late due to this washing operation.

After driving a while I started thinking how lucky I was last night that I stopped
at this hotel. Road just got worse, more road works and rest of the road that was
still left would have been really horrible to drive during the dark hours! Good
decision.

After some 170 km I came to the Ankara-Istanbul highway, drove thorough the toll
gates as I did not have the card to pay and there was nobody to sell those!

After some 300 km, quick stop to drink on the way to Istanbul and just before Istanbul
refuel again.

On the way I saw at least dozen of GSA’s in groups of 2-3 bikes going towards
Ankara. What a good bike!

300 km later I was in Istanbul and by the toll gates wondering what to do now! Still
no card, but here was a bank to purchase ones, so started looking at those option.
Soon there was a man asking do I have an problem and I said that I needed a card
to get through. He was some sort of manager of the place and got other man to fix
me a card. Minimum for the card was 50TL, as I had no Turkish money left, paid 25
EUR for the card.

Back to the road.

Three accidents on the road around Turkey blocked the traffic quite nicely, but
I just drove behind some local scooter and went through quite nicely. No need to
stop even once!

After Istanbul again excellent highway driving with speed of 150 km/h. Official
speed for the motorcycle would have been 100 km/h (for cars, 120km/h)…

At the border there was some queue on Turkish side and I happened the pick the lane
where there was trainee and it took ages to get through.

Finally managed to get pass him and to the Bulgarian side. Here I got to the head
of the queue again and needed to open the bags again, this I think was the second
or third time. He only wanted to check that I’m not carrying any human’s
in the bags! So no need to empty those, just open. GSA’s side bags are so
big that a child can fit those, right? Man at the border was talking perfect English
and made jokes on the Bulgarian highways, that they took 300MEUR to build the road,
but forgot to build it… and that to find my way to Bucharest, just follow
the bad road…

Next stop after this was the road tax booth. After waiting there few minutes, lady
at the booth started waving at me and I went ahead of the queue again. Once I got
there and asked what it was, she said that no tax for the bike! Ok, fine, to the
road again.

Funny thing is, that before this I have had to pay the tax twice when I have been
in Bulgaria… Go figure…

On Bulgaria started perfect small little road. I had no issues with that after driving
highways for hundreds of kilometers. Road was in quite good shape and I could easily
keep up 100 km/h.

I had minor issue with fuel, it looked that I was about to run out of it so I had
been looking a place to get more now for 100 km or so. In these small villages that
I was driving through there were not really places to get fuel with credit card.
But then there came one bigger village Nova Zagora so I just put Zumo to find gas
station and hoped that it was big enough to work with credit card. And it did. Needed
only 30L so I still had good reserve…

This route from Edirne border crossing was one of the best 260 km to Veliko Turnovo
I had driven this trip. After that I got a bit bigger. From there I also got my
new driver in front of me, Romanian car which obviously had been here before and
new the road and where the police was with the radar. Outside of these areas, 120-
140 km/h and when police was at sight, nice 50 km/h!

Bulgaria-Romanian border is by the river and over the river there is the Danube
bridge. When I got there, I saw huge traffic jam. At the same time there was also
one Romanian couple with Kawasaki and I just glued into their tail and followed
through the cars them to the front of the queue.

It turned out that bridge had only one lane open, other one was under repairs. We
waited and chatted there for probably ½ hour, he said that he had met me
year ago in Romania or Bulgaria as well, but hey, can’t remember everybody…
All knows monkey, but monkey knows nobody…

When bridge was cleared, I drove first and on the Romanian side the border crossing
was really easy, no need to stop the bike! And there is still the passport &
customs in place…

In Romania it looks likes dogs are a bit more stupid than in Turkey and other places,
I saw at least 6 dogs that had been hit by a car on the way to Bucharest. And that
was only some 60 km away!

Hotel was a mess to find, Zumo guided me to right neighborhood, but it had a bit
old map as it was trying to force me to drive one way lanes… So took a while
until I found how to get to the hotel that was on my sight…

But eventually I did.

Todays riding was 1143 km in 14 hours, including two border crossings. 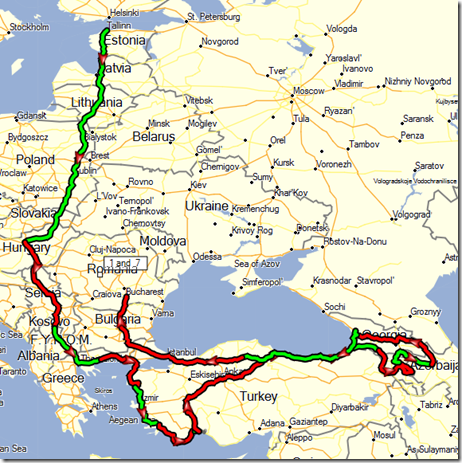 As seen on the map, I’m starting to move towards east again… Next is
Moldova, Ukraine and Russia. Home is getting closer and closer, only some 3000 km
to go!