Days are starting to look alike… wakeup early, breakfast (if any), packing and engine started for a new day.

Breakfast was excellent on this Bucharest hotel, first time after leaving Belek to get eggs & bacon as well. 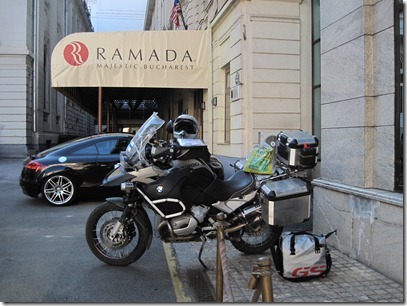 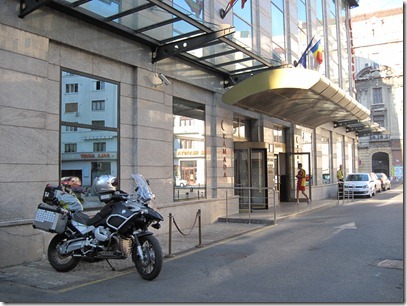 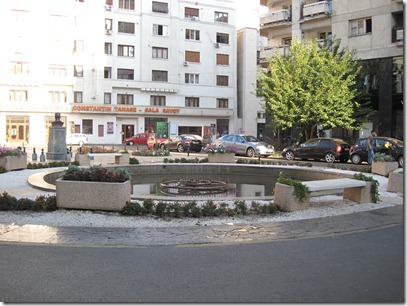 Driving through Romania was excellent, first driving towards Constanta some 100 km two lane highway and then moving to smaller roads.

On the way towards Moldovia something flu into my right sleeve and bit me. Did not bother to investigate what that was, just pressed the part to kill it! It must have been a big one as there was blood coming through my jacket…

One stop on the way to Moldovia to get fuel so that I would not need to do that in there, safer to refuel in Romania where I knew how things work. 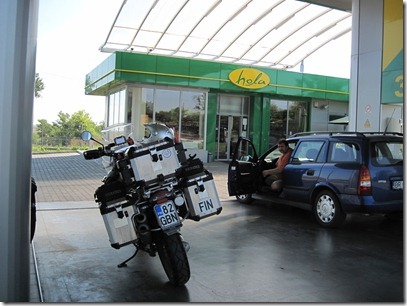 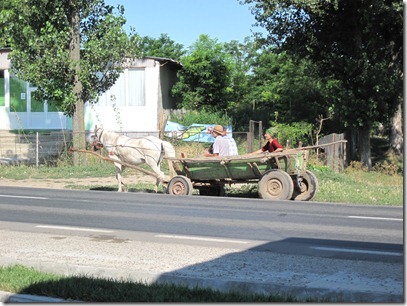 Border crossing at Glati-Giurgiulesti from Romania was easy, small queue so it took still some 20 minutes. Moldovan side had little more things: First normal passport check and then customs. Customs wanted some 2 euros for me taking the bike into their country. Or customs wanted 1 euro and bank 1 euro as well…

At the border the man who checked the passport was guiding me to the right direction, drive some 2-3 kilometers and I’m on Ukrainian border crossing. Of course I was not going there as I planned to drive through the country via capitol Chisinau.

Roads were mostly in quite bad shape, jumps all over and while all roads were paved, they had not been redone in years.

On the way there were also lots of drinking places like this. I was not going to taste that, but I guess some locals do… 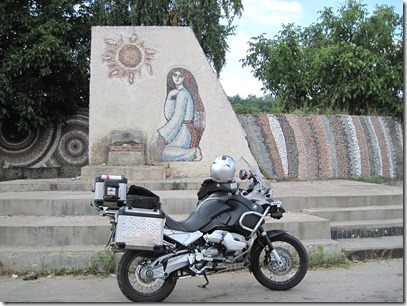 Chisinau was quite a big city, drove through that according to what Zumo guided and it went smoothly.

Then started again the fun part as I had not done my homework on this.

As driving towards Ukrainian border, there was a police checkpoint which said something about customs. Ok, they did not bother me or anybody else so forward.

Next just before the bridge, there were soldiers standing with guns. They did not move either so forward.

Still nothing was ringing in my head on this one, I was just driving happily.

Then came something that looked like a border. Had to wait in the queue for some time before getting to the border crossing.

There were three booths that I needed to visit: passport check, immigrations and customs. First two were fast, had to fill immigrations paper and hand it over. Customs took ages. They did not really know what to do, needed to find some numbers, I filled two copies of same common blanked that is everywhere on these countries, only difference on this was that it had colors and everything on one side.

At this point I did not look at the front of the paper and did not think again that why is this paper done when leaving Moldova?

It took an hour to do this customs document for this man. I did not want to think what would happen if there would have been more people on this queue as I was… For citizens of CIS countries this was not required, they just passed to passport check and moved forward.

But eventually this was done as well and I started driving.

It did not take that long until there was a next stop. Now I thought that hey, Ukrainian border.

But all they wanted was to check passport, took out immigrations paper and asked some questions about my guns, drugs etc. etc.

At one point there was a man asking about the country stickers I have on the bike. And he asked where is the Dniester Moldavian Republic sticker? Then it hit me. This was going through THIS and I had not been on the Moldovian exit border…

Ok, no problems, I was still moving forward.

Then came third stop. This was now finally the Ukrainian border. Simple, no issues and fast forward. They just wanted to hear how the bikes sounds like…

Next was 80 km driving to Ukrainian Kiev-Odessa highway. These kilometers were in pretty bad shape, cars were not driving more than 60 km/h, I was passing them by with minimum of 100 km/h… These roads are made for GSA!

Once I got to the highway, some 300 km to Kiev left. One stop between to refuel, had issues with language, lady on the desk did not really understood what I asked. Credit card did not work, I had no Ukrainian money, but euro worked. Only thing was that she put amount as 30 EUR and I got fuel for that. Not full tank. But, I got euros back! Usually on these cases they give local currency back, but not in here.

Rest was easy, just following other cars again so that they would show were the radars are and there were many of those. Without this approach, for sure would have been caught by one of those!

Found hotel easily, parking in front and sun was just about to go down. While I was unpacking the bike, started hearing Finnish talk. There was a group of men from Finland spending their time in Kiev, had been spending last 3 days more or less alcohol related activities and were now about to go out to eat. Was really tempted to go with them… but decided to stick to the hotel. Tomorrow would have been destroyed if I had done that…

Todays driving was 948 km in 13 hours and I spent probably 1½ hours or more on these borders. 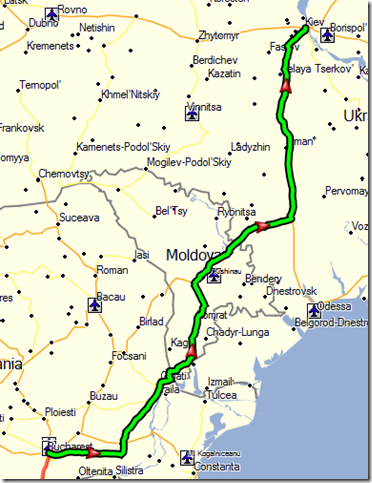 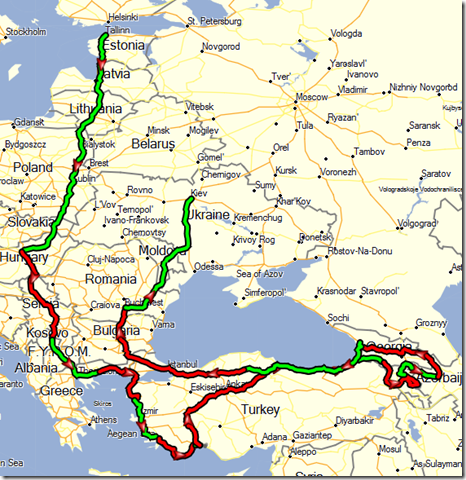