Finally managed to get breakfast at 7:30 in Hotel Perla in Fes. Hotel was quite nice, got a room with A/C, Wi-Fi worked well at the lobby, but not in the second floor. Hotel was near the train station and there was 24/7 guard watching my bike during the night. All was ok with the bike when I left. 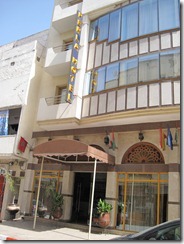 My plan was to drive over to Midelt where I had looked up an hotel.

When I left Fes temperature was still fine, just 25 degrees, but it started climbing quite fast and soon it was already over 30.

Quite soon I managed to get out from main road and into smaller ones through villages and onto mountains.

At some point I realized that my helmet camera had not recorded anything, quick stop to see what was wrong and found out that battery from my remote control had died. Not going to find one from here so from now on had to press to button on the recorder which is a bit harder, but works. Note for the next trip, take replacement battery for this as well. 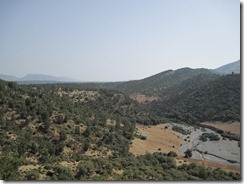 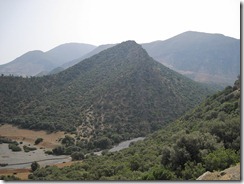 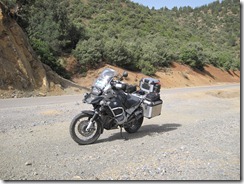 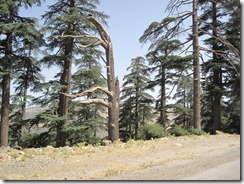 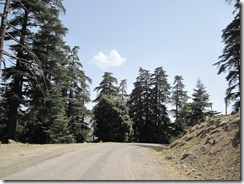 Highest peak I managed to cross was just over 2200 meters. And on top of this mountain there was a man watching some generator feeding electricity into some mobile stations. I managed to get him to take picture of me as well. 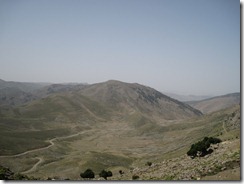 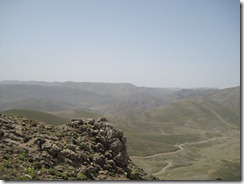 At this point I already started thinking about possibility to drive to Merzouga instead of Midelt. It was only some 260 km between these two cities, so why not? I was not that exhausted as yesterday, so I decided that once I get to Midelt and fill up the gas tank, it is time to make some decisions.

Nice little mountain roads ahead, getting better and better all the time and so was my speed.

After coming down from the mountains I started noticing that area around the road I was driving was full of tracks. There had been lots of activity in this area offroad. And some really nice oasis as well. Almost took bike into once of these, but then decided not to as it was involving some soft sand driving, there was no real road into these.

On the crossing just 16 km before Midelt I finally made up my mind. Merzouga it is for tonight. It was only 256 km to target and Zumo was showing some 3 hours driving time. Not a big deal.

Road was excellent, big newly done, really and sightseeing road following at one point river with palm trees and all. 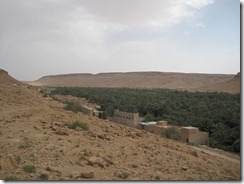 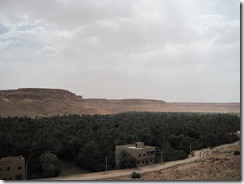 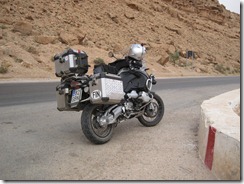 Once I made it to Erfoug I made a wrong decision. Kind of. I turned into smaller road which ended pretty soon and road continued in many many directions in form of offroad tracks! I soon realized why Zumo did not want to create a route via this road… Lots of soft sand, big rocks and I had Anakees under my bike. They were slippery as hell in this soft sand, really impossible to drive.

I got stuck couple of times and really had to sweat to get bike moving again. I just laid down bike, new sand under the back tire and new try and I was moving again.

All this was eating lots of energy and water. Luckily I had enough water, I did not ran out of it during this exercise. Note to me: Anakees are not meant for driving in Sahara’s soft sand.

First sight of the dunes was also ahead of me. 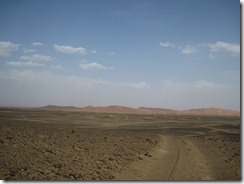 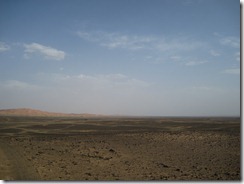 This offroad track was 24 km long and it took an hour to finish it! Would have been longer, but did a shortcut to the main road.

But eventually I made it Merzoug and into a hotel. Not sure yet what hotel this is, no real signs outside… but I suspect that this is Kasbah le Touareg. Room with air-conditioning and Wi-Fi working in the lounge was enough for me. And price was not that bad either, ~30€ including dinner and breakfast.

Dinner was just excellent, some soup, break, chicked with potatoes, carrots and something and as a dessert fresh melons!

And a bottle of water to go.

All in all, good hard driving day and now that I have eater I start feeling better. During the driving I did not eat anything, took only water.

This day brought 568 km in 12 hours, it should have been only 326 km… Temperature was almost all the time over 30 and at the end 46 degrees Celsius. Imagine yourself driving offroad with fully loaded GSA with very demanding tracks… And I was sweating a lot… 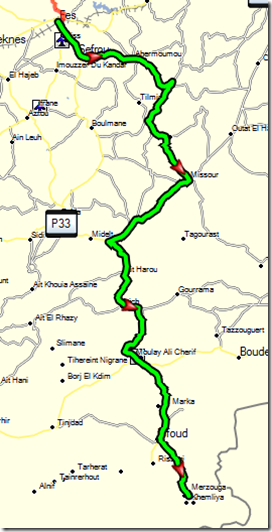 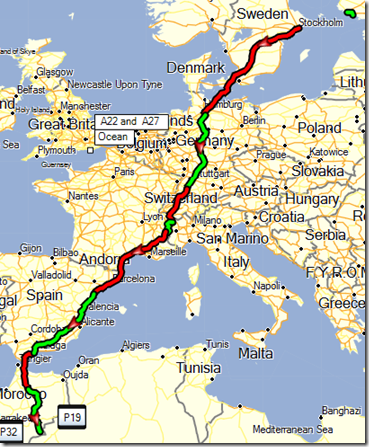 This is now the turning point on this trip, tomorrow I will be heading towards west and north. Slowly. Some 323 km route planned, but who knows where I might end up at this pace…