At the morning I was taking it easy. Although I woke up early again, plan was to take some ferry around noon. First trial to get some breakfast failed, restaurant was not yet open as it should have been, half an hour later doors were opened but not everything was put in place. Finally before 08:00 I got it.

Managed to do some work related stuff during the morning and packing all the stuff again, at 11:00 I was again ready for a ride.

Quick checkout from hotel and to see if bike is still there.

On my way out I noticed that there were once GSA from Belgium parked on the street which was not meant for vehicles and once I passed there was a man running after me and telling there had been police giving a parking ticket for it and he was offering that for me! Not my bike, not my ticket!

Was glad to find that bike was still there untouched where I left it late last night.

I’m getting used to park bike where ever it fits, as does everybody in here.

Took 12:00 ferry to Algericas from Ceuta, cost with the bike was this time 58€ (to Morocco it was 60€, but different company), it left a bit late but 13:30 I was already out from it and on my way. Forgot to put earplugs when leaving, did not bother to stop until next mandatory stop for water or fuel is about to happen, so ride on!

I had planned an route that would take me more into inland, not the coastline that I came. Was hoping to get some more warm air and I did. Temperature was only 24 degrees at the beginning, but very soon raised to over 30 and even 41 on some areas.

Route was also excellent. Lots of bikers on the way on this same route as well, so must have been popular choice.

Stopped few times for water and once for fuel, nothing much on the way.

Except almost at the end of the day, some really new curvy road just made my day! Like this:

And this continued some 50 km or so! No going up or down, just lots of perfectly curved road! Very nice road indeed.

Found hotel Sidorme in Albacete I had picked right way, nice new hotel with nothing extra, just a clean room with a/c and working Wi-Fi.

There was no restaurant to serve dinner, so walk to next door mall was next in the task list.

Found one kebab and two hamburger places, so this time hamburger it was.

Todays driving was 617 km in 9 hours (including the ferry). 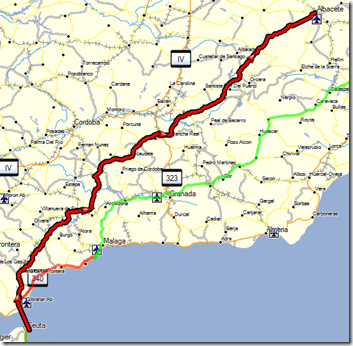 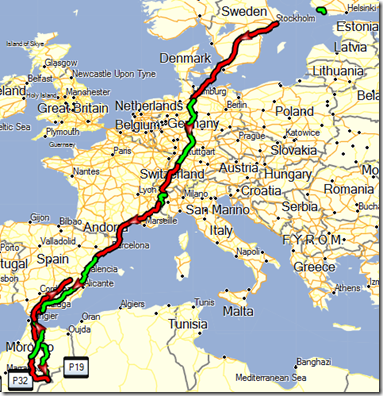 I must say that during the previous years when I usually took some Iron Butt ride on these trips, lots of places were not seen. Now when taking it easy, travelling only during daytime I ‘m able to see a lot more places that have been hiding somewhere outside of big highways.

This whole Iron Butt thing is good to leave behind and start enjoying riding the bike and not just sitting on it! Gives a whole lot more to this hobby.