Started early as I got good night sleep and by 07:00 I was already driving again. Before leaving made two cups of coffee for breakfast, dinner was still good enough for stomach otherwise so no need for anything else to get me started. 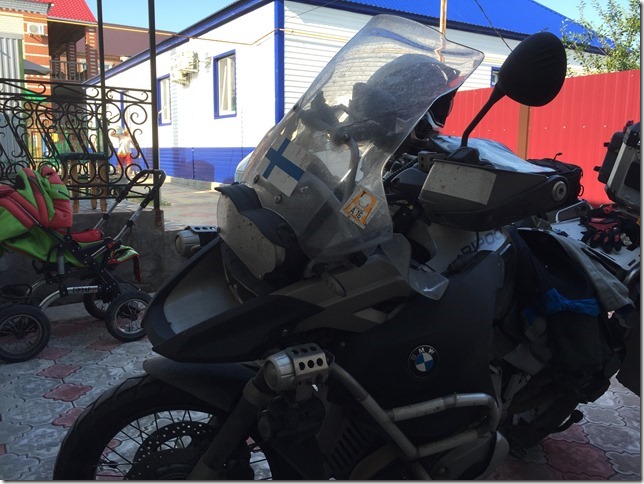 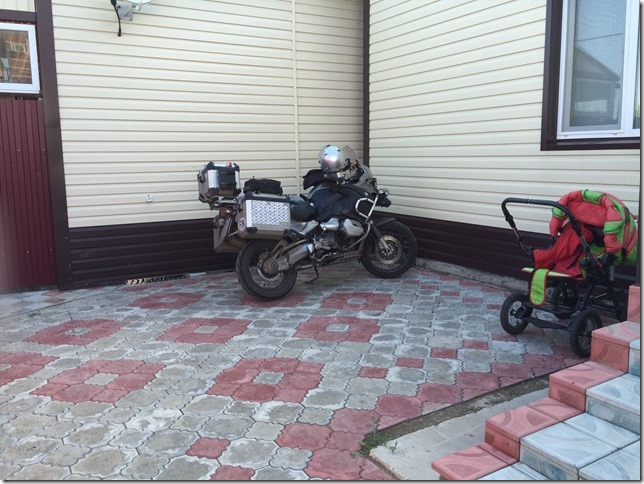 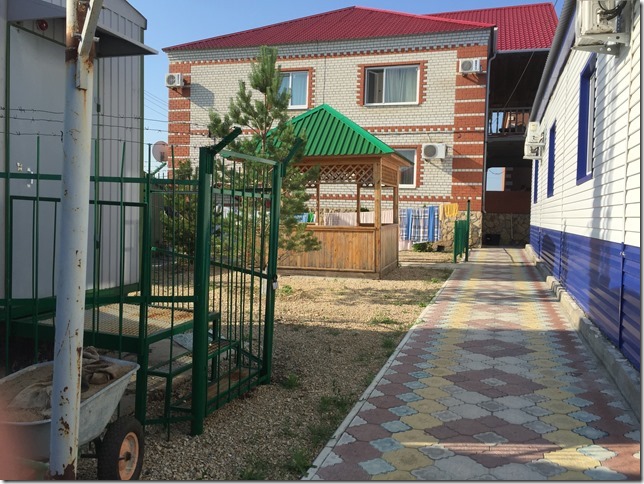 Again, left without knowing how far I need to drive. Plan was to drive to Khromtau, but no place reserved there for the evening.

Road was still in quite horrible state, but suspension in  big mountain mode it was still quite ok. At least no cars trying to pass me.

Before the border took one break to get extra water out and some new in. 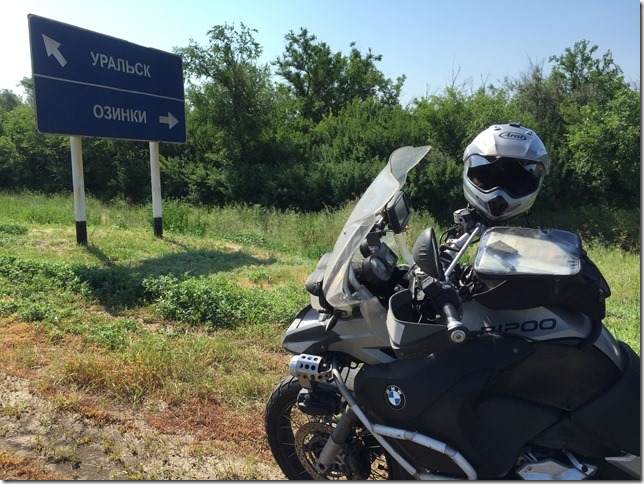 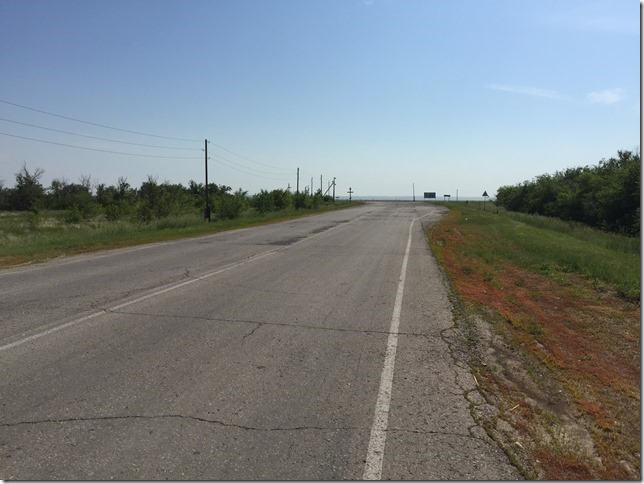 Border was really ok, Russian border was totally empty when I arrived so it took only some 15 minutes to get through. Compared to Ukraine-Russian border there were no guns hanging anywhere, all border guards were really relaxed and talking to me. Atmosphere was really different to the previous border.

Kazakhstan border crossing was also quite empty. They were first trying to deny my entrance because I had no Kazakhstan  visa on my passport but I got them convinced that Finnish citizens do not need visa and finally it went through and I got into Kazakhstan again. They even filled all the papers for me which was really nice.

Road on Kazakhstan side was really different from Russian side, all holes were there on the road and not filled with anything. Road was also on some parts under repairs and everybody was driving on the side of the road and there were anything from nice gravel road to soft sand, mud and asphalt on the way for first 100 km or so. It really looked like my timetable was going to be ruined but road got eventually better.

Cows were also standing by the road in many places. 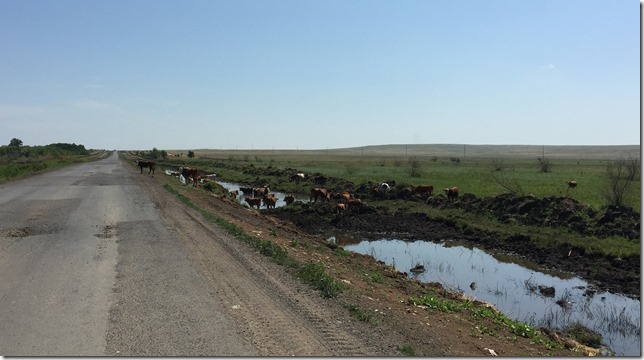 I was also running out of fuel again and started looking for fuel stations.

First one I tried accepted credit card, but they were out of internet so no go. 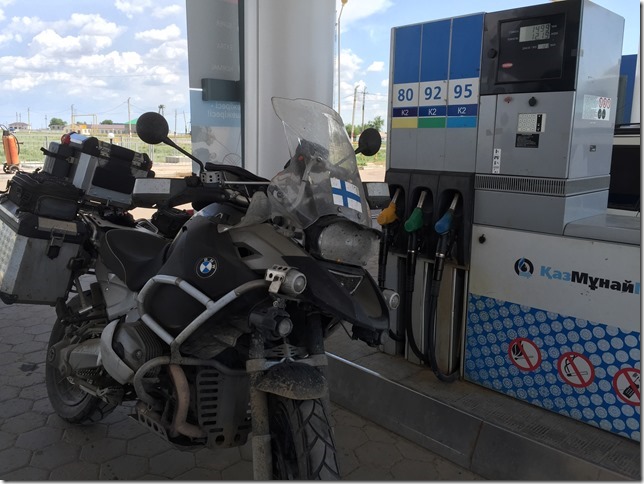 Second one did not have internet either and credit card did not work, but this guy offered to get me 15L of fuel in exchange for 500RUB which was fine for me! 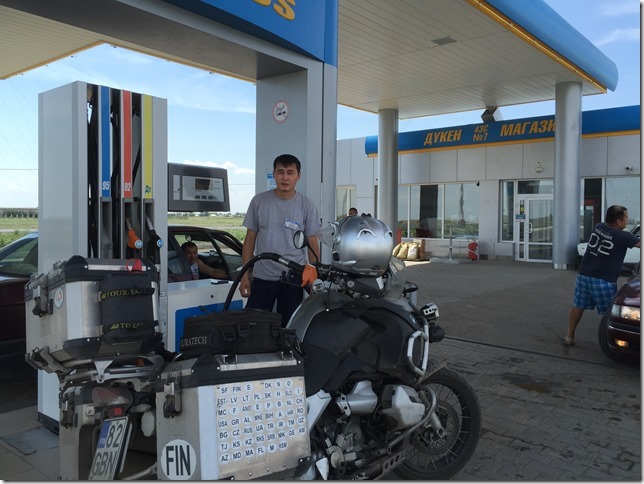 Next stop was for fuel as well, this time they accepted credit card just fine, but cannot understand concept of full tank. Always need to tell them how many liters I want. Go figure. 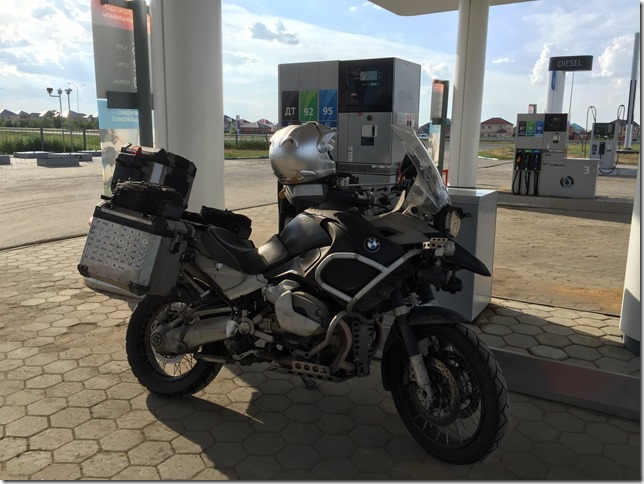 Eventually I got into my next planned destination – Khromtau. This place should have had two hotels according to OSM map, but both of them were closed.

In front of one of these closed ones there came a guy to ask what I was after and offered to take me to motel he knew. So I just followed his card out from the city and back to the main road where this small motel was located.

Motel of course did not accept any other payment than cash, so this guy drove me first to the bank and also to the supermarket to get me some water. Very friendly of him indeed! 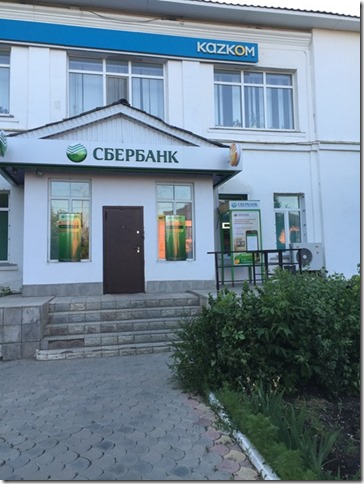 Motel itself was quite ok, clean room with shower, got my bike parked behind the locked gates and it had also internet connection so all was good. Wi-Fi did not work in the room, but that did not really bother me as I could sit in the entrance for what I needed. 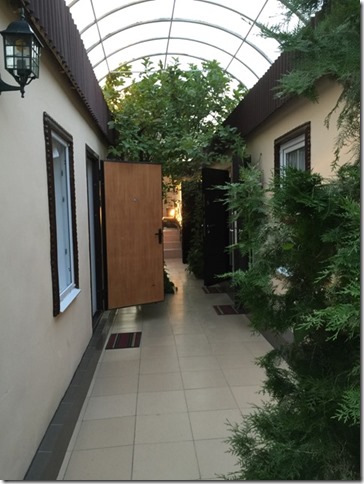 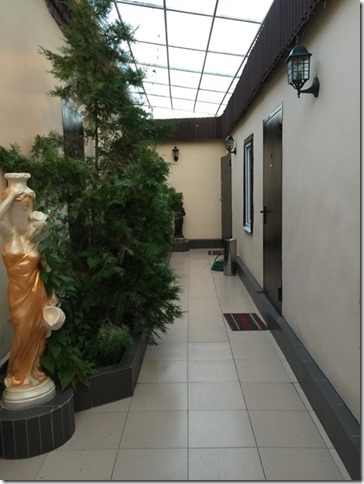 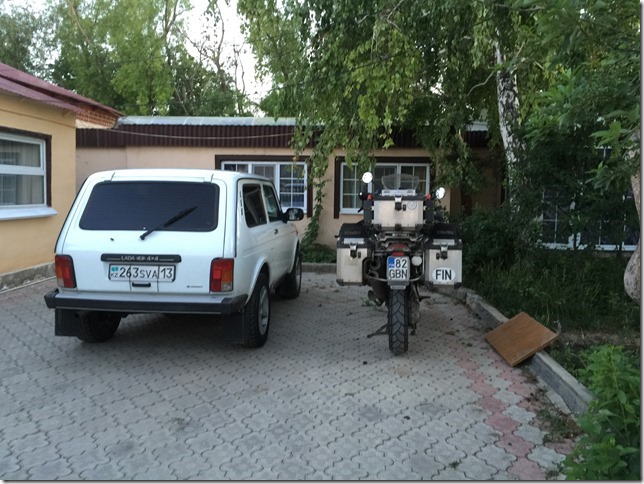 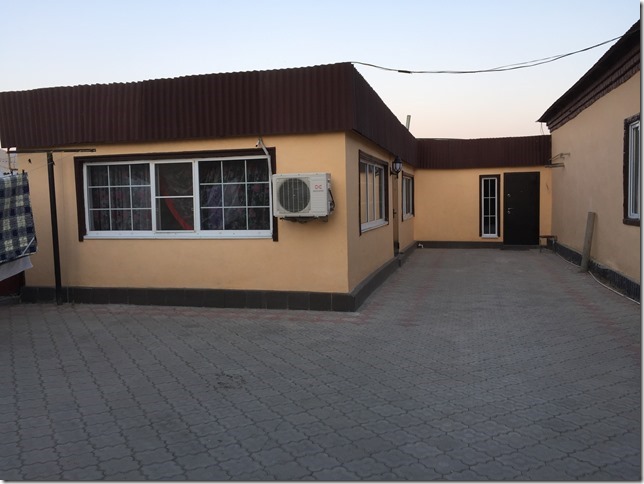 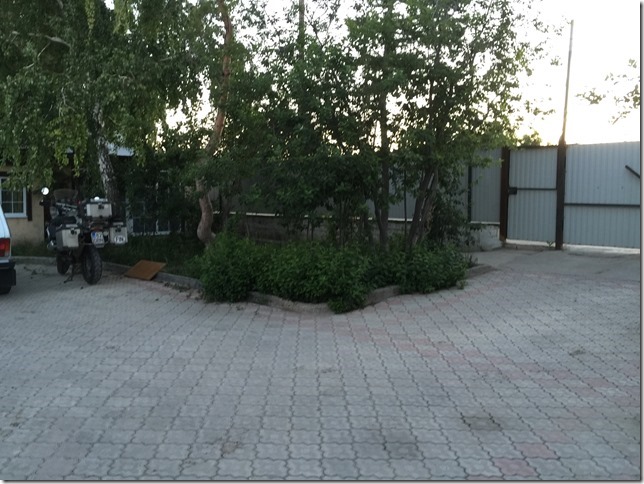 Last thing for the evening was to find some food and I saw in the map one place few hundred meters away so walked into that.

This turned out to be excellent choice, got good food and waitress also gave me access to internet through her own phone. Very nice.

They also probably posted some of my pictures in their Instagram account so need to see those one day if I find them. 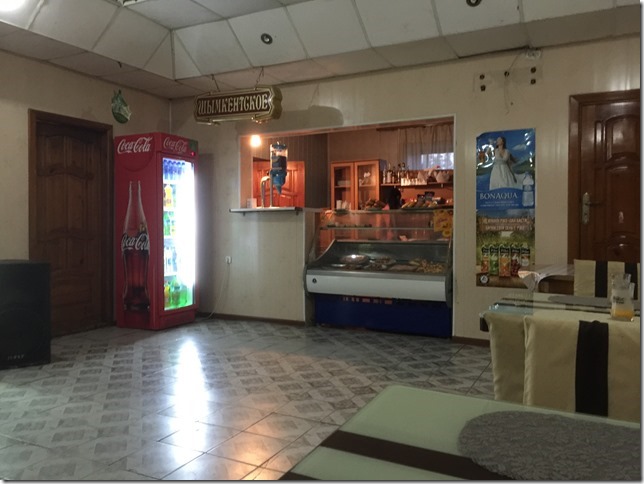 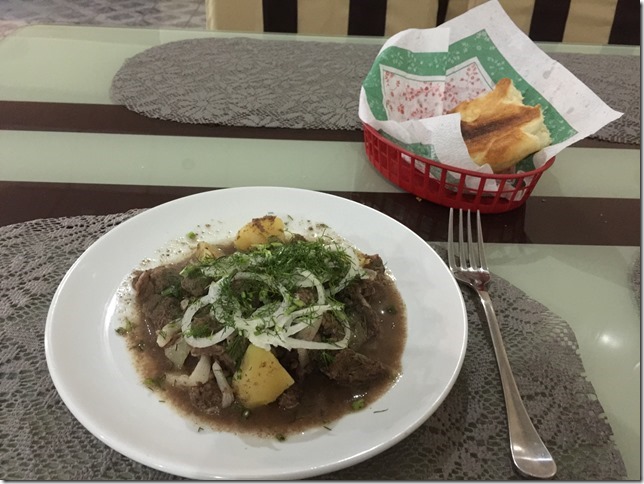 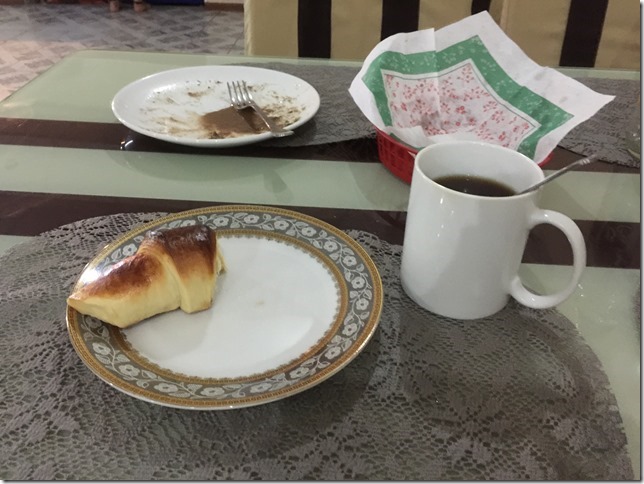 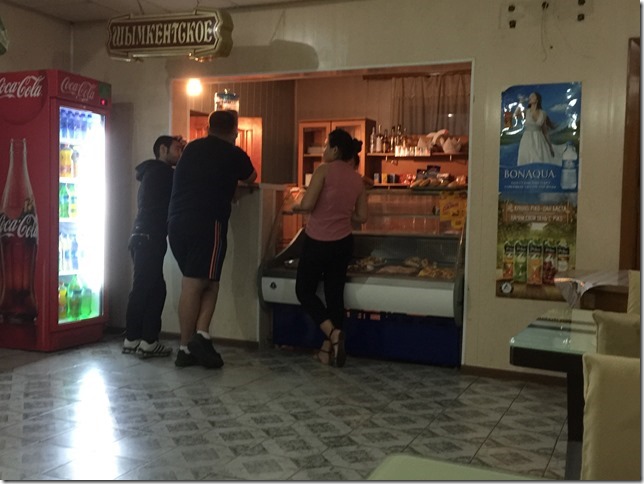 One more thing for the evening was to check the bike and I noticed that oil is at its minimum so took out the oil bottle and filled some more. I’m already approaching the service time so this was kind of expected. I plan to ride to Barnaul and do the service there while I take one day of from riding over there. 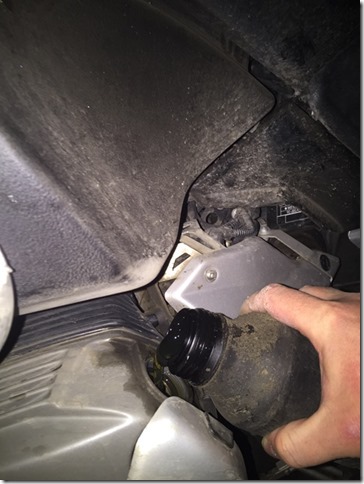 Total for the trip is now 9504 km and as you can see, I’m travelling quite straight to east at the moment.